This past weekend we experienced a very cultural event in our community: Fasching-also known as Karneval and Faschnacht. Basically, this is the Rhineland’s Mardi Gras-a celebration before the beginning of Lent. There are a week’s worth of activities, starting with Women’s Day followed by various parades and parties. This was an event we definitely wanted to experience. Luckily, I’ve made some really great German friends who generously included us in all their festivities.

Fasching began on Thursday with Women’s Day-but we stayed home because we heard this is more of an adult party in all the cities. The only thing I know about it, is all the women can cut off the ties of any man they see that day. Also, there is a symbolic handing of the keys over to the women of the town from the Mayor (what if the Mayor is a woman? huh.) I have a feeling it’s just an excuse for everyone to get drunk!

Friday, Nathan’s school had a party-so I sent him to school as a dinosaur. 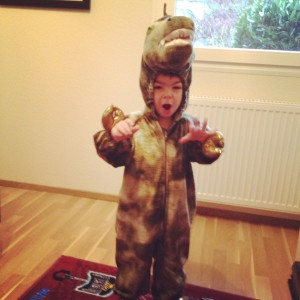 Kids typically dress up as Cowboys, Indians, Pirates, dinosaurs, Clowns  and Princesses. It’s not that different from Halloween except I didn’t see a single “character” from any TV show or Disney movie. It’s all generic costuming. The adults costumes range from big bears, typical Mexican wear (think sombrero and a big colorful shawl), indians, pirates, clowns, pigs, Smurfs (the only commerical costume I saw), and many more.

The school was decked out with disco lights and there was a very festive feel when I dropped off Nathan. When I picked him up, I had never seen him so excited! He told me he kissed all the Princesses and they had played with a Puppet Theater that he was super excited about.

Saturday, Dan and I finally got to be involved in the party. There was a parade happening in our small town and we decided to go there instead of the craziness around the big cities. I got the feeling that taking Nathan into the City would be like taking him to Mardi Gras in New Orleans so we wanted to avoid it. 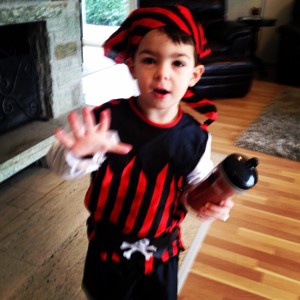 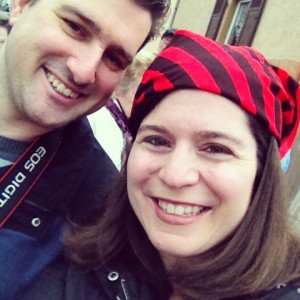 The parade was so much fun and very festive! It was a small town parade in the vineyards so the floats were made from tractors and the adults in the parade were passing out wine and small bottles of liquor to the spectators, while simultaneously throwing candy to the kids. (They also throw kitchen sponges, matches, and other random everyday useful items.) 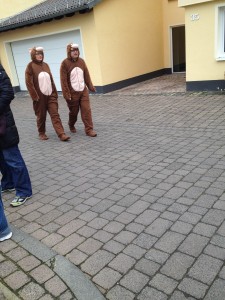 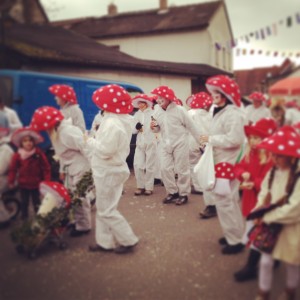 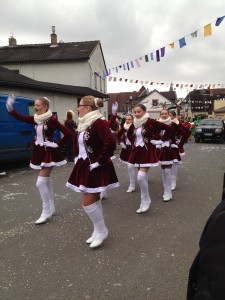 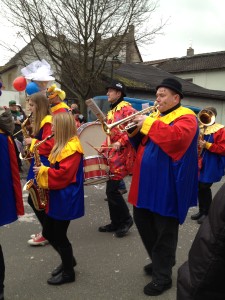 Each float had a theme-there were “cheerleaders”, mushrooms, pigs, clowns, pigs and the most shocking: a group of people in blackface. The blackface group had afro wigs on and grass skirts and their float said something about the “SchwarzGarten Community” (Black Garden). I looked into the history of this and I was told by one german that “anything goes at Fasching” the more outrageous the better. Germans didn’t have slavery, so maybe blackface doesn’t have the same connotation as it does in America, but it was still a culture shock. 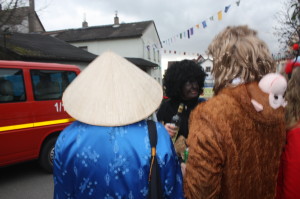 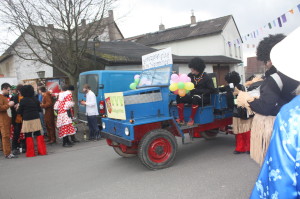 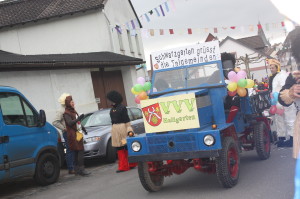 The parade goes around once and then all the people walk about a block to meet up with the parade again and watch again! This happens one or two more times until the parade participants are drunk or the candy runs out! They also have a saying they yell out-at first we thought they were saying Hello to us, and then we were told it’s the Fasching greeting “Helau” and when you hear it it sounds like the Seinfeld epsiode when they say “Helloooooo” (google the episode if you aren’t familiar). I was told the saying means nothing-its just a greeting you say to everyone.

Nathan had a blast as a Pirate and loved getting all the candy-even if he was a little slow to start-all the candy thrown at him in the beginning was being grabbed by other anxious and excited kids. I think there were adult tent parties that night, but we stayed home.

Sunday we couldn’t decide which kids party to go and we chose the wrong one. The small town we chose had their party at the local community center and we walked in and felt like we were at a school assembly for someone else’s kid-and in german. Nathan was bored, we were bored, it was a waste of 7 Euros and we left after 30 minutes. (Bonus: A trampoline outside the community center that Nathan spent 20 minutes jumping on). We didn’t do anything else that day, so Sunday wasn’t spectacular for us.

Dan had to work on Monday but one of my friends invited me along with her family to another town to watch the big parade. Nathan and I were generously invited to break bread at their friend’s house where homemade soup, weiners and brot (bread) was served (along with wine and glu wine). The kids were older but absolutely loved playing with Nathan and he had access to all their autos-so he was in heaven.

After lunch, we walked into town for the parade. This was a MUCH larger parade with a ton of people. I can’t imagine what the big cities were like because this was chaos. Nathan was running ahead with the older kids and I kept losing sight of him (I was a little nervous but he actually kept coming back to find me-success!). Nathan even had his first porta potty experience (much cleaner than a New Orleans porta potty during Mardi Gras I am certain). 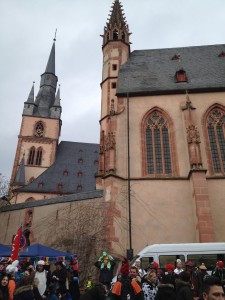 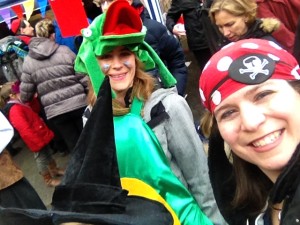 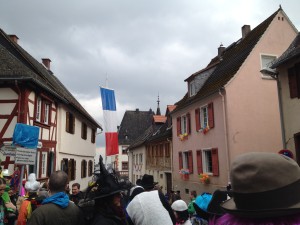 This parade was much longer, with bigger and more extravagant floats-and much bigger tractors. There wasn’t any blackface in this parade but there was an awesome Ghostbusters float, Joker from Batman and both regular Smurfs and neon pink smurfs. There was also a Western Float witha  picture of Johnny Depp and John Wayne. Candy was thrown again and lots of loud music (Gangum Style and German pop songs so quite diverse). 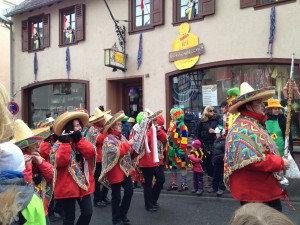 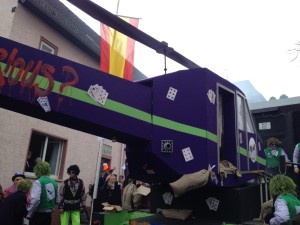 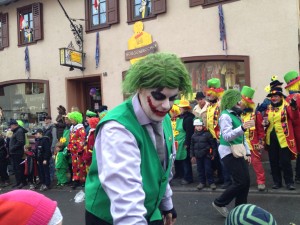 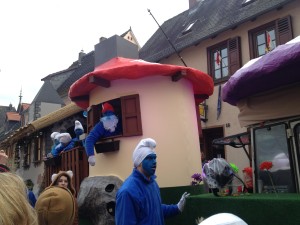 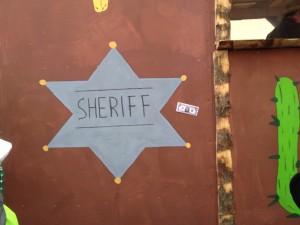 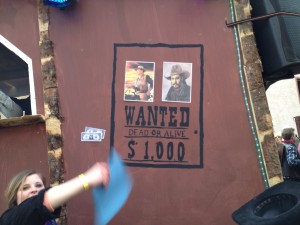 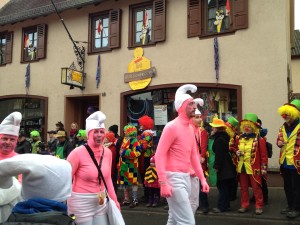 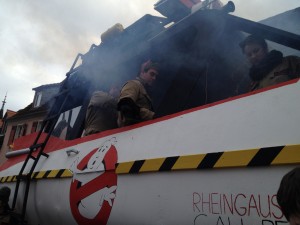 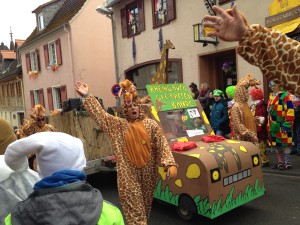 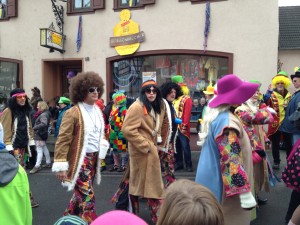 After the parade (about two hours), we headed back to our new found friend’s house for coffee and donuts (the donut is THE food to eat during Fasching). These donuts are powdered and have a strawberry filling and are called “Berliners.”

More families came back to the house, so Nathan and I both navigated our way through a german speaking party. Nathan seems to adjust pretty well when he is dealing with all german and the adults went back and forth between German and English (lots of laughter during the german conversation-so I just ate my donut and tried to pick up phrases).

Overall, this was my favorite day for Fasching because I really felt like I was part of the cultural experience by celebrating with a German family and all of their friends. Everyone was warm and welcoming and loving to Nathan. It was a full day and I was with them from 11-5. It’s by far one of my favorite experiences in Germany thus far.

Nathan went back to school on Tuesday (Shrove Tuesday-aka Fat Tuesday) and the kids were encouraged to dress up. The mood wasn’t as festive as the Friday before and I think after five days of costumes and candy, the kids and parents were kind of over it. I had to fight with Nathan to get into his pirate costume again-but hey those two costumes he had sure got a lot of use! Way more than any Halloween costume I’ve ever owned! (And Nathan wore the Pirate costume for Halloween too).

I’m looking forward to Fasching next year-who knows, maybe we will get a babysitter and experience the adult parties-or even just attend the parade in Mainz or Wiesbaden!