In Germany, Kindergarten, also known as Kita, is for kids between the ages of 3-6, unlike the States where kindergarten is just for one year prior to First grade. The word, literally means “Children’s garden” and according to Wikipedia: it was created in 1837 in Bad Blankenburg as a social experience for children for their transition from home to school.

One of the main reasons we decided this move would be beneficial to our family is so I could stay home with Nathan. He is going to spend the next 15 years in school all day and I just wanted these precious moments of his childhood to myself, instead of spending 40 plus hours away from him.

Nathan and I took time adjusting to each other and spending all day, everyday together. After a few months, I realized I was not enough for him. Ironic that I finally have the means to stay at home with home and he is at an age where he really needs more socialization and little friends his own age to play with. He has had playdates, but he needed something more consistent for his growth. Nathan is a social animal and he LOVES other people—so I started looking at german kindergartens. I didn’t want him in school all day (that would be besides the point, wouldn’t it?), I just wanted a couple of days a week for a few hours a day to give us both a much needed break. (I really was running out of things to do with him-how do teachers do it?!).

I live in a small town, and everyone I spoke to said our little kindergarten was excellent-and all the neighbors’ kids attend, so I set up a meeting, liked what I saw and signed him up! The transition for Nathan has been both difficult and easy. Having been to daycare before, leaving me was much easier for him (I may have shed a few tears). But it’s an all german-speaking school and that’s been tough. I have learned that Nathan’s basic form of communicating is to say “No.” I think he is frustrated that he can’t understand and only knows to just say no.

I pick up him up and the teachers tell me he is doing “vunderbar!” and he tells me about building trains and going down the slide, and playing cars, so I know he is having fun. It’s been a little over a month (with a large break for Chicago), and he can count to ten in German but that’s about as much as he knows for now! 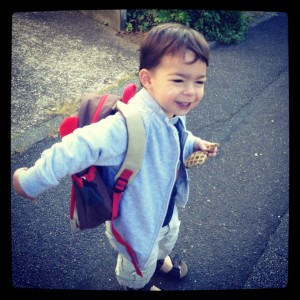 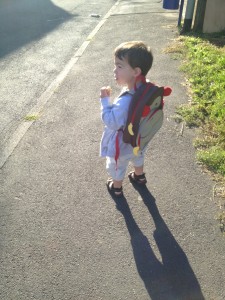 The first day I dropped him off, I stayed with him for awhile and it was a little girl’s birthday. We all sat in a circle, the little girl wore a crown and had three candles in a stand that she blew out. They sang four or five songs to her and she opened little gifts and then they brought up a couple of coffee cakes. I’m not sure what is the norm for German birthdays but it wasn’t so different from American birthdays-other than the candles aren’t in a cake.

The teachers are incredibly warm and friendly and they love Nathan. I was worried because Nathan had the best teachers in Arizona and I thought it would be hard to find teachers as loving as Dora, Judith and Esther! (We still miss them!)

Sending Nathan to school makes me feel like we are carving out a little piece of the community and have really moved in now. We are starting to make friends and get to know our neighbors and community. Now, what to do with 15 hours of free time every week!?!? (I’m certain I won’t have trouble filling my time!)