The prospect of taking a toddler on a 9-day roadtrip which includes eating out every day, touring historical sites, and giving time for a toddler to run free seems like a daunting task. It’s not for the faint of heart. You absolutely have to be willing to abandon your plans at any moment for a massive meltdown that can’t be contained (this happened). You have to be willing to miss out on learning details of chateaus that are 300 years old because your toddler wants to run to the garden and see the water fountain instead of DaVinci’s bedroom (this also happened). You have to be willing to be stared at because your child is screaming in the street with no shoes on, refusing to move on to the next activity (yep, this happened too). And you have to be willing to understand that only one spouse will really gain any knowledge of how champagne is made on a tour of a champagne cave while other tour members give you dirty looks because your child is happily singing Pirates of the Caribbean (he thought we were on the Pirates ride, who can blame him? It was dark and there were cages!)

Traveling with a spirited toddler has its moments of pure bliss (Mommy-look! It’s the Eiffel Tower!) and pure despair (see above), and sometimes I wonder if we are crazy but I know deep down in his developing brain he is getting a cultural experience that is somehow shaping his future.

We started off in Reims (four hours from Frankfurt) and about halfway to the Loire Valley-which was our main goal of the trip. Reims is a medieval gothic town known for its massive cathedral that rivals Notre Dame in Paris. It’s absolutely stunning and the location of Nathan’s first meltdown. After arriving at our hotel, our room wasn’t ready, so we strolled the cobblestone streets and came upon a carousel! It looked like it was straight out of the 19th century so Nathan and I took a spin on it! We had our first magical moment. 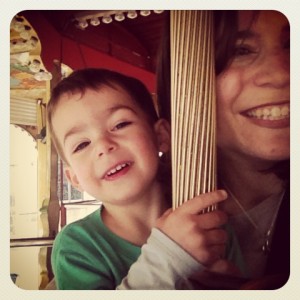 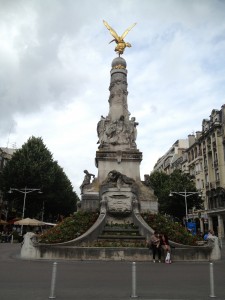 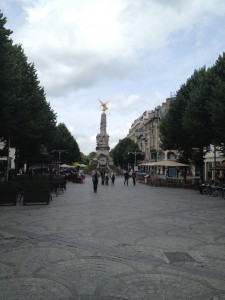 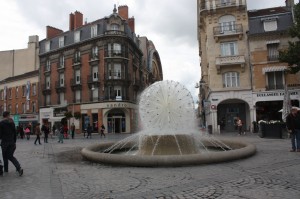 After our room was ready, we set out to find the cathedral. Taking Nathan around in the stroller-he was fine-we read from our guidebook and made our way through. The cathedral is celebrating its 800th birthday, built a few decades after Notre Dame. The architects learned from the mistakes of Notre Dame and improved on the structure. It was built in 1211 and generations of families helped build it but never saw it to completion! That’s how long it took!! Also, 26 French Kings had their coronations here, giving it more importance than Notre Dame. Joan of Arc led Charles VII to be crowned here and there is a statue of Joan outside the cathedral. 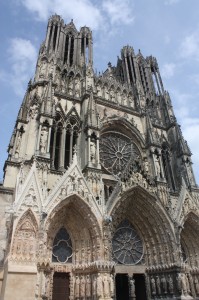 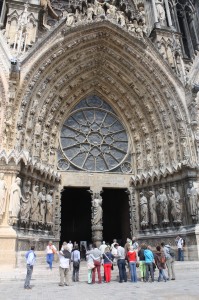 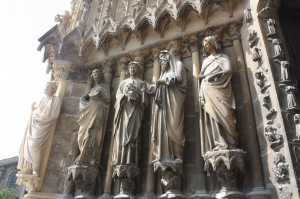 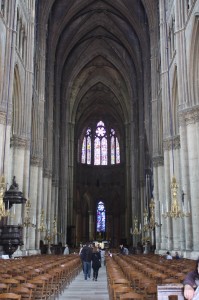 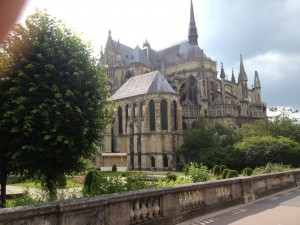 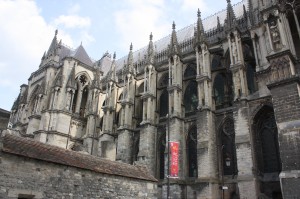 So we learned a lesson at the cathedral as well: always let the toddler run free at some point, even when you think you have given them freedom and playtime-it’s never enough! Follow the warning signs. Nathan had been in the car for four hours that morning. We let him run around the hotel room and play on the carousel. But he had been in the stroller for the cathedral tour and the walk around town. He started whining when we left. Dan walked into the Tourist Info center and Nathan started crying-I took him inside but then he started wailing, so I quickly took him outside so Dan could get the info we wanted and be able to hear! But then Nathan started screaming! He wanted back in! (first he wanted out). At this point, people were smiling and watching as I tried to desperately calm him down. They were saying things to me in French that I only imagined went something like this “Take that poor baby out of his stroller!” or “Shut that baby up!” with big fat grins on their faces. Actually, they were all being really nice and one couple came up to Nathan to try and soothe him-and he shut the stroller umbrella in their face. At one point there was biting and hitting…it wasn’t pretty. I finally decided to just let him out of the stroller, and you have never seen such a change in personality so quickly. He started running in circles and laughing. Who is this happy child? Where did that devil child go? Tell him never to come back! Thanks! 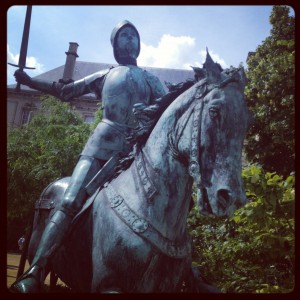 The rest of the day had its ups and downs-we left the Cathedral and let Nathan push his own stroller to avoid a fight and made our way to the Carnegie Library (no we didn’t take Nathan in) but we each ran in separately to get a glimpse of a place that still uses the Dewey Decimal system! And yes, it is named for its funder Andrew Carnegie-there is a small American flag on the building to honor him. 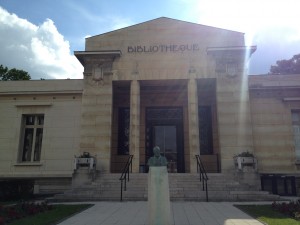 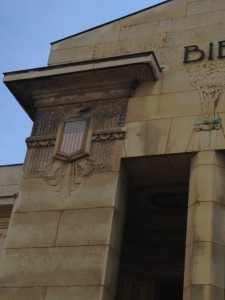 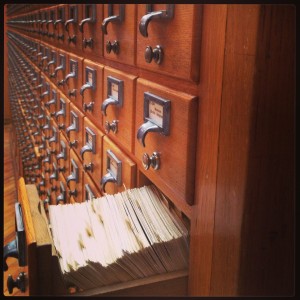 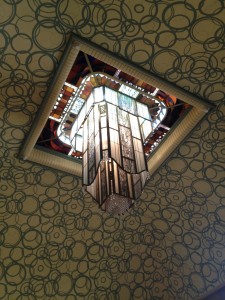 Dinner was another lesson. It was 6PM, we were hungry and we weren’t in Spain, so we figured that was a normal time to eat. We headed out to a Rick Steves recommended location: Bistrot du Forum. After serious negotiating with Nathan and an ipad briber-we got him to sit down, only to be told dinner wasn’t offered for another hour! We didn’t want to get him back in the stroller and find another place, so we ordered him the cheese plate and got champagne. Of course, not many toddlers will wait an hour so Dan took him to play in the courtyard outside-and getting him back in was a series of time outs and screaming. This was only the first night and we were beginning to wonder if the whole trip was a bad idea. 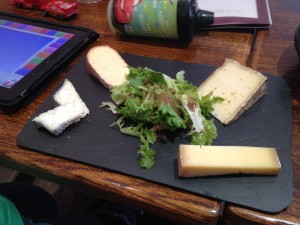 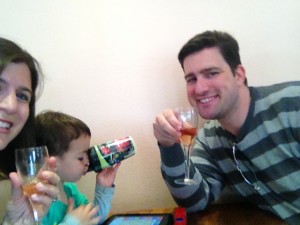 Bedtime wasn’t any merrier. Even though we had a separation and a door between our room and Nathan’s, he spent 45 minutes climbing out of his bed and opening the door to our room. (Frosted glass really isn’t a great door separator-he can see us!) And then I spent the night listening to foghorns and disco music. So the next morning, I wasn’t exactly well rested!

The next morning we decided to be really brave and take Nathan on a tour of a champagne cave. We decided on a place called Mumm because we could walk there from town. We were on an English speaking tour (we booked in advance the day before), and Nathan was the only child. Oh joy. I was more interested in what the cave looked like than the details of how champagne is made, so I nominated myself to chase Nathan and let Dan enjoy the tour. I did not want to ruin anyone else’s tour, so I was really respectful of this and did my very best to reign Nathan in-but he is 2 and he does like to chatter to himself a lot. He was so happy during the whole tour, chatting away-Mommy look at this! Mommy it’s pirates! Mommy-Yo Ho! Mommy what’s that?! You can’t yell at him for being curious and happy, so I took him away from the group a lot and showed him the cages (where is Captain Hook Nathan?) and played Peter Pan games as much as I could. Not everyone was happy, we definitely got a dirty look or two from two people, but I did my absolute best. (Nathan was on his best behavior). I was basically in it to see the caves and the champagne tasting ☺ 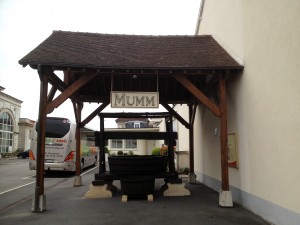 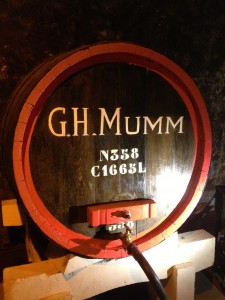 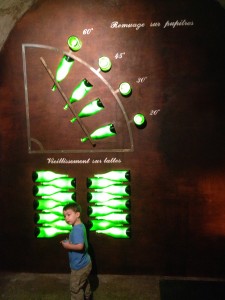 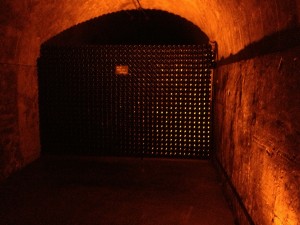 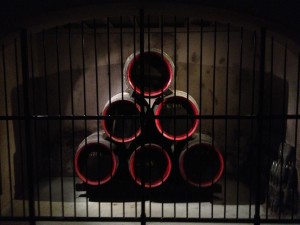 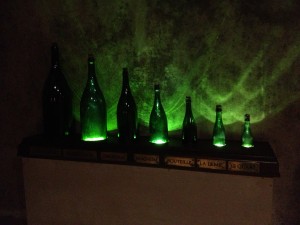 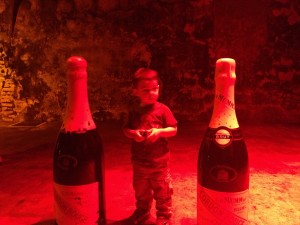 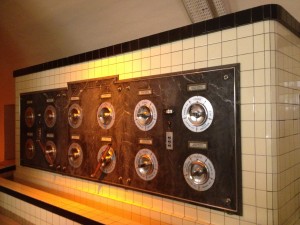 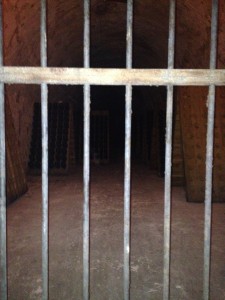 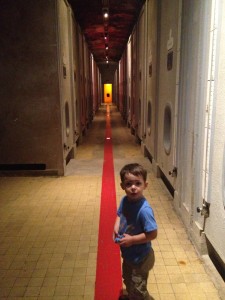 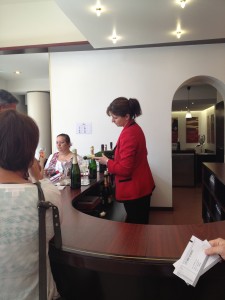 There was only one other site we wanted to see in Reims, Museum of the Surrender, the location where the Germans surrendered on May 7, 1945. We made our way over there only to learn they were closed for 2 hours for lunch! Since we were heading out of town with another four hour drive ahead of us, we didn’t have the time to wait until 2PM, so it wasn’t meant to be. That was all the time we had for Reims, so we headed out to the Loire Valley for the next three nights to visit the infamous Chateaux region. We were staying near the town of Amboise, so we loaded up on French treats (quiche and tarts) from a local bakery and headed out! 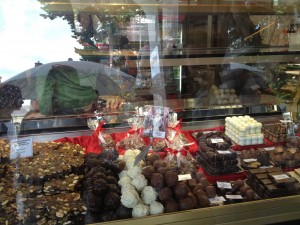