Sometimes I am a nervous flyer-but flying with a toddler leaves no time for the mind to wander to worst case scenarios on airplanes. So I was surprisingly calm as my friends took me to the airport. As you can imagine, moving overseas equals a lot of luggage. Moving overseas with a toddler equals loads of carry on items-ever form of distraction ever invented was coming on this flight with me. I was fully armed and prepared for 11 hours with a two year old!

With 3 suitcases, four carry-ons and a stroller doing this alone was possible but not my favorite option. Lucky for me I have fantastic friends-and two of them drove me to the airport and walked mt up to security to make life a little less stressful for me. That was the best part of the whole day.

I had no nerves as I made my way through the airport. Normally I get sweaty, shaky, pee a lot and have an anxious feeling like I can’t sit still. I was so calm that I should have known it wasn’t going to be a smooth ride (and I don’t mean turbulence!).

Nathan made two little friends and he was so excited to watch out the window of the terminal yelling “OH AIRPLANE!” every time a plane took off. His energy and excitement were endless. 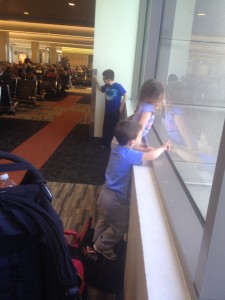 We made our way on board, everything was on-time and we were sharing a 3-person row with a single lady. Nathan  was in the middle seat and ready to fly! The airplane had other ideas though. We began to taxi and I had all my tools laid out-iPad, sticker book, headphones for the TV, two sippy cups of milk and a bag of goldfish and animal crackers. I was completely set. All of a sudden we stopped. And the plan just sat there. The pilot said nothing for a good 30 minutes. Meanwhile, I was trying my best to hold off on letting Nathan use the iPad because I really wanted to save all of my tools for th 11 hours. He finished off one milk and one bag of goldfish and was getting bored with the stickers. We finally got an update from the pilot (in German first) and I realized there is no german word for “Computer failure” because that’s all I heard.

Basically, they were going to call Germany to determine if they could fly as is. (I wasn’t so comfortable with that option). After determining it was a necessary device, they announced they were going to try and fix said problem. At this point, I had to start utilizing the tools I brought with me. The airline kept shutting down and “rebooting” the airplane. The plane kept switching between freezing and boiling hot. Everytime we had another reboot, the whole plane moaned in annoyance, knowing whatever they were doing had not worked. 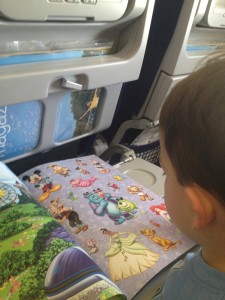 Every 30 minutes the Pilot would announce that they were still working on the problem. The flight attendants starting serving juice and water and announced we were free to move about the cabin for the bathroom. Ironically, Nathan was so engrossed in his iPad (I gave up on holding off) that he thought we were flying! This went on for over 3 hours. At 3 hours and 10 minutes I overheard a flight attendant tell another passenger that the maximium amount of time they could keep us was 4 hours. Nathan was starting to get restless so I got up and walked him around and refilled his milk. Nathan decided he wanted to see what first and business class were like (definitely my kid!) and I was shocked when I walked into First Class to see the passengers with their bags deboarding the plane! Those of us in steerage (sorry Economy), had not been told a thing and these passengers were already deboarding!! I stopped a flight attendant and asked her what the chances of this flight leaving and she said “It does not look good.” Ya think??

About 15 minutes later, the Pilot announced that the flight had been canceled. We had been on board for just under four hours. It was nearly 7PM, my son had not eaten anything but goldfish and milk and all I had was a Matterhorn cookie leftover from Disneyland. (a true lifesaving cookie as I was starving!) Juice and water weren’t exactly filling my belly.

We were herded off the plane and I had four carry ons and Nathan with no stroller-and no one could tell me where or when I was going to get my stroller. 7:30 is Nathan’s bedtime, so he was getting sleepy and wanted to be carried! Luckily I found a nice airline employee to drive me to the check-in desk (with 400 other passengers). In four hours, the airline hadn’t figured out how to design a line for 400 people. So everyone was kind of pushed together in a big mish mash of people. At one point they took the center people and shoved us off to a side line (so all the people behnd us were now basically in front of us). I got moved with this group and was off on the side and not moving. I could barely hold the bags and ensure Nathan didn’t run off as 2 year olds tend to do. So I called my friend who lives ten minutes away and he came right over. Thank god for him (thanks Lee my sanity would not have survived without you!!!). He brought the only tools he needed-his iPad and himself and swept Nathan away to the food court while i waited in the line. 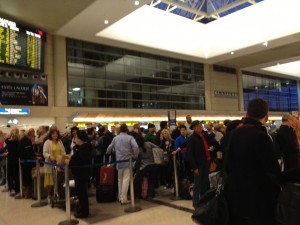 I pretty much lost track of time, but I eventually left the side line I was forced into and forced my way to the front of the main line, while calling Lufthansa on my cell. After 10 minutes on hold, Lufthansa told me that they could not rebook me because I was showing as already “flown” on my flight. They said I had to take it up at the counter. When I got to the counter-after a nice lady told the staff I was flying with her so I could be next (she knew I had a baby somewhere in the airport and felt sorry for us). The staff wrote down the name of the hotel on my ticket stub and said “this is your voucher for the flight” and here is a card from Lufthansa-call by 11 tonight to make sure you are rebooked. He didn’t tell me anymore. I had to ask-which flight? When? He said the same flight, the same time the next day. So we all had to wait in this super long line for over an hour to be given zero information?! I was overtired and furious and had no energy left-it was 9PM and I had still not eaten.

After locating my luggage (and stroller), Lee and I got a cart and went searching for the Radisson Hotel shuttle-look no further than he 400 other people waiting for the same shuttle. I had no desire to wait, so we decided to walk to the other terminal and jump on a shuttle there. Would have been a brilliant move-had any Radisson shuttles came by that area….After 20 minutes we realized we would be waiting forever, so we jumped on the Sheraton shuttle instead. It’s only a quick walk (about a block or so) to the Radisson. However, we had all my luggage, so my other friend Robbie drove to the Sheraton and drove the luggage to the hotel while we walked. Once I got to the hotel-I waited in another fun line with all the same people to get my room while the boy got pizza and MUCH needed WINE.

They gave me vouchers for dinner and breakfast that “could only be used in the restaurant” and not room service-but with a hungry two year old, I was not about to put him through a dining experience! I asked the front desk for a crib and they called while I stood there and listened….and of course 45 minutes later, it had still not shown up.

Nathan was running around the room like a maniac but he was happy. He was such a good little traveler/trooper. The boys came back with the goods and we chowed down and tried to figure out when my flight was. Dan called the travel office at his work and United (who we booked through) and United was showing the flight leaving at 10AM. Lufthansa had a busy signal for over an hour but online it was showing the flight departing at 2PM. Before I left the airport, I made one more quick stop at the Lufthansa desk and they told me to call at 8AM instead of11PM for the most updated information. So at this point in the night I decided to go to bed and wake up at 8 to see if I could get anywhere. Nathan ended up going to bed at midnight and i went to bed at 1AM. The day had been emotionally and physically draining and we were still in LA. The worst part of the entire mess was when we were deboarding the plane, Nathan thought we had been flying and he looked and me with a huge grin and said “See Daddy?” I wanted to cry as I had to break the news that we hadn’t even left LA yet.

The next morning Robbie agreed to come back to the airport to help me again with all of my bags. I called for room service and begged them to use the vouchers-as I really didn’t want to take Nathan to a meal. (I found out this morning that the hotel charged me $28!!! Still trying to work that out).

Robbie took me to the airport where we waited in another super long line for check in to go through the whole process again. I said my goodbyes-thanks again Robbie-and made my way through security where Nathan decided that taking his shirt off was an awesome idea. 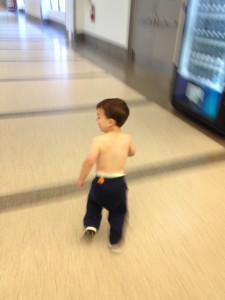 He was having a blast and didn’t care! This time the flight was in another area where we had to take a shuttle bus to the plane. I was so ready for this flight, I didn’t care if I had to take a boat to get there at this point. 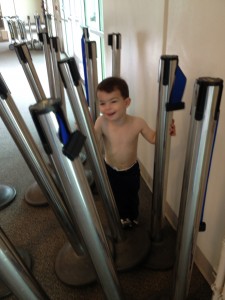 We finally boarded and I thought we had the whole row to ourselves-until the last second when a woman boarded-but I asked if the flight was a little emptier now, if we could move-so they found me a row with 4 seats and only one other person-Nathan was able to spread out and and sleep in 2 seats. 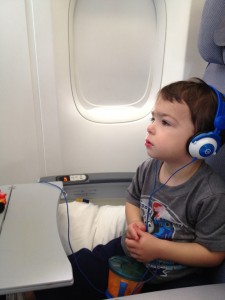 (Before we moved seats)

At this point, the 11 hours I was so worried about seemed like peanuts! The flight actually did fly by fairly quickly! Nathan slept for the first two hours, woke up and ate and watched TV and played on the iPad. He laid down for 2 more hours (but never fell back asleep) and before I knew it, I had watched 3 movies and we were landing. The long 36 hour ordeal was well worth the payoff in the end!!! I’m still a little jet lagged-but we made it and we love being reunited with Daddy!!!!!! 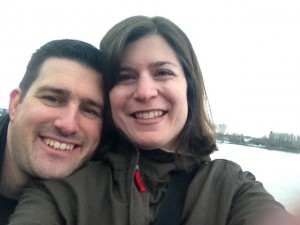 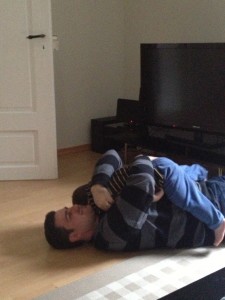 In the end, it really did take a village to get Nathan and I to Germany!!!

A BIG thanks to our wonderful friends! 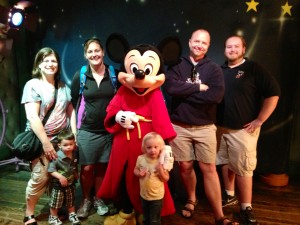